This is NOT a political post. I am highlighting the word “COLLUSION” and just couldn’t resist the temptation. When I hear the word I see 45’s mouth making that big long ‘O’ sound…

But to my point, in the proactive sting cases performed by police, the police, prosecutors and judges have all discussed this material TOGETHER. Now you could say “well, yes, they discuss them as a whole and in a general sense but not each individual case.” However, it is that exact general discussion that is also illegal.

“Ex Parte” Contact with the Judge is Not Allowed

There again is my latin lover – “Ex parte” is a Latin phrase meaning “on one side only; by or for one party.” An ex parte communication occurs when a party to a case, or someone involved with a party, talks or writes to or otherwise communicates directly with the judge about the issues in the case without the other parties’ knowledge. Under the Judicial Code of Conduct, judges may not permit or consider “ex parte communications” in deciding a case unless expressly allowed by law. This ban helps judges decide cases fairly since their decisions are based only on the evidence and arguments presented to the court and the applicable law. It also preserves public trust in the legal and court system.

When I was talking with ‘Mary’ from the Las Vegas ICAC task force, she informed me that the police, prosecutors and judges all discuss what would and what would not be allowed in court for prosecution. Wait, what?!?!

It also states in one of the police training books for ICAC ‘not to surprise the judges’… How is it that you cannot surprise a judge? Since the judge knows nothing about this case, right?, I would assume that everything you say is a surprise to them.

In Jace arraignment, the judge actually said outloud, ‘is this another one with multiple kids?’ Ummmm – can you read the information before you, instead of lumping people into groups of predetermined guilt? Of course the information in front of him said he had a DUI… so much for accuracy! 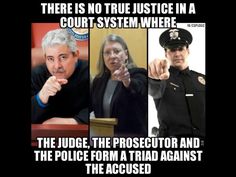