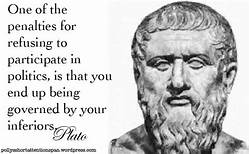 At this point in our fight I have reached the point where I completely understand what Plato was referring to. Not so much that politicians are inferiors, although CLEARLY many are. But that if you don’t participate – then you are at the mercy of those who do.

In my last entry I discussed my acceptance that no one is going to do a damn thing about an innocent man in prison. In fact, I’ve discovered there are a LOT of innocent men in prison. It used to be a joke that all men in jail are innocent….

Yet somehow I find myself in the odd position of actually KNOWING the families of three innocent incarcerated men!

AND BEING ONE OF THOSE FAMILIES!

So my journey has now changed – for those of you who don’t know – I live in an RV, 3.5 miles from the prison in Washington State that holds my innocent son. I am blessed to be able to see him three days a week. But now I am no longer trying to free him. Now I plan to change the laws that put him there.

After reading that Noel Frame, Washington State House of Representatives member, recently passed a bill protecting minors from being prosecuted as Sex Offenders for ‘sexting’, I reached out to her office. The group of parents I work with will be meeting with her May 20th to discuss how we can start a bill to protect men, especially young men, from police ‘catfishing’ those looking for sex online. Many of these men are looking for consensual adult sex in an appropriate environment, when police snare and entice them to break the law. A true predator would be wise to such tactics. Young innocent men are not, and thus are prosecuted at a rate of

one out of three in washington state proactive stings!!

This needs to stop. And these young, innocent, incarcerated men’s families are determined to see this through.